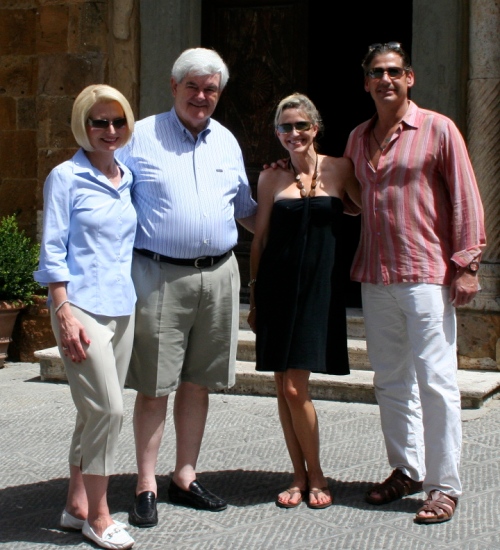 Callista Gingrich and Newt Gingrich after mass in Trequanda, Italy on July 1, 2012

I guess you could say our first day of vacation in Tuscany has been pretty remarkable! James and I decided to venture out of our villa in Sinalunga (the municipality of Sinalunga is in the province of Siena) in search of the rare Tuscan store that is open on a Sunday. Last year when we vacationed in Tuscany, we often travelled to the medieval village of Trequanda and thought we remembered a store or two that might be open. After driving up the walled hill that once marked the entrance to the ancient Cacciaconti castle, we parked just outside a park and the entrance to the piazza. I am shocked when I notice former Speaker of the House and presidential candidate Newt Gingrich following his lovely wife into the historic church “Chiesa dei SS. Pietro e Andrea.” I later learned this ancient Romanesque church with a unique white and ochre checkered facade, dates back to the 13th century.

The former journalist in me just can’t believe that the Republican Speaker of the House who recently withdrew from the presidential race—is here in this same remote village in Tuscany attending mass. Even though I’m a Democrat, I admire Newt’s intellect and his ability to debate. As a former Atlantan, I also have heard many stories and arguments over the years from Republican friends who support him. Because of this, I  watched several interviews between himself and Piers Morgan this winter and spring while he was running for the Republican nomination and just after he withdrew his candidacy. I got so excited that they are here, I convince James and his brother Tommy to sit on a bench outside of this church and wait for them to finish mass so we can say hello. As we wait in the 95 degree temperature, we begin to get antsy and while Tommy looks around, I also take in the surroundings of this quaint, historic village and it’s piazza.

For a Sunday, it is still alive and well with tourists sight seeing and locals strolling and stopping for a bite to eat.

Cafe across from Chiesa dei SS. Pietro e Andrea, in Trequanda, whose owner took our photographs with the Gingrich’s. After mass, the former Speaker of the House and his wife had lunch here.

I was amazed by this tiny side door of the church and its unique stone carving above the doorway.

After about 20 minutes, Callista Gingrich walked out of the church. Dressed in smart Khakis and a pressed blue shirt, she smiled as we stood up to say hello. You really could not imagine a more friendly person. Because of her demeanor, my butterflies disappeared. James said hello first and she immediately held out her hand and introduced herself. We knew who she was, clearly.

“Are you vacationing here too?” she asked while smiling. We told her we were staying in nearby Sinalunga and she remarked how beautiful the remote villages in Tuscany are. She didn’t seem fazed at all by us and brushed off my apologies for “bothering” them while they were on holiday. She later told us that they were vacationing with friends and love to go to mass while on holiday. When Newt walked out, he wasn’t as friendly at first, but then held out his hand instinctively and said hello, asking our names and where we lived. When we asked if we could take their picture, I was surprised by Callista asking for my camera and then walking over to the owner of the nearby cafe to see if he would take a few pictures of all four of us together. When I chuckled and said, “Thanks for this” to Speaker Gingrinch, he laughed and said, “Well, it makes her happy,” and shrugged.

Not only did the cafe owner take our picture, but Callista asked him to take a few more, just in case they didn’t all turn out. 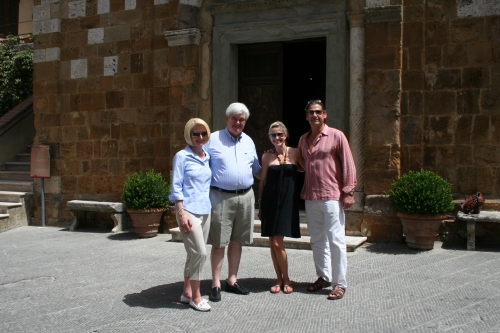 What a kind and friendly person Callista is! Clearly, while the two of them are finally enjoying some anonymity in such a remote village in Tuscany as this—especially after so many stressful months campaigning—they didn’t have to take the time to chat with us and pose for pictures. I hope the two of them enjoy a wonderful, peaceful holiday in Tuscany!